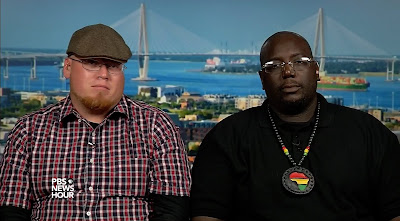 One of my favorite reads this summer was Sheryll Cashin's Loving: Interracial Intimacy in America and the Threat to White Supremacy.  She builds on Edmund Morgan's American Slavery, American Freedom, which argues that slavery and racism were invented by the ruling planter class of Virginia to prevent interracial working class rebellions like the one that ended in the burning of Jamestown in 1676.  Cashin focuses on just one of the many types of laws that were passed to elevate the status of poor landless whites and degrade blacks and to keep the races apart--laws banning  interracial sex and marriage.  She carries the story forward and shows how those laws stayed on the books after emancipation and helped to keep the working class divided by race in the Jim Crow era.  What is great about Cashin's book is that it ends on a hopeful note. Since the Loving v. Virginia case ruled those laws unconstitutional, more and more white and black people are getting married and forming mixed-race families.  These families and their friends and relatives, she argues, become "culturally dexterous" and she predicts that "the dexterous class will lead America to confront what most ails us in race relations: the social and spacial isolation of poor black and brown people" (187). It's already happening in a number of integrated enclaves around the country, she says.

But the non-dexterous are still strong enough to elect a president.

The well-respected political scientist Larry Sabato suggested in an interview with the Boston Globe that Trump's reluctance to criticize neo-Nazis and other white supremacists comes from a desire to maintain support of "the large block of racially resentful white voters."  "'Nobody is making this distinction,' Sabato said. 'Neo-Nazis aren't big enough as a voting group.  But whites with racial resentment, you better believe that's a big block."'

Since the election there has been a spirited debate about what motivated white people, especially working class whites, to vote for Trump. Some credit economic motives and frustration with two mainstream parties that failed to halt the outflow of good manufacturing jobs and presided over 40 years of stagnant wages.  Others argue that white voters were responding to Trump's subtle and not-so-subtle appeals to resentment and fear of various minority groups, including Mexican and other immigrants, Muslims, and blacks. The two things are related.

The Republican Party has used dog whistles and Southern strategies to redirect white economic anxiety toward racial resentments during this era of wage stagnation.  But Democrats, too, have helped to divide the working class. I was shocked by comments this week by Daniel Loeb, a hedge fund manager and big Democratic donor, suggesting that teachers unions had "done more damage to people of color than anyone who has ever donned a hood."  In fact, the decline of unions has harmed blacks more than whites, since black people have had a higher rate of union representation than members of any other race (see the chart below).

But in the 1970s, Democrats started backing away from policies that helped workers generally at the same time that they embraced policies advancing racial justice. Jefferson Cowie documents this process in his wonderful book, Stayin' Alive: The 1970s and the Last Days of the Working Class.  "Many could see that placing affirmative action onto a world of declining opportunity was little more than a zero-sum game--and most likely a fast track to further racial resentment," he writes. Cleveland Robinson, a black union leader, was one of those who saw the problem.  "The basic ingredient to successful affirmative action is full employment," he said. If not, "you will have both blacks and whites fighting for the same jobs" (268). Recall that the March on Washington in 1963 was called a March for Jobs and Freedom.  Democrats failed to pass the full employment bill sponsored by Augustus Hawkins, an original member of the Congressional Black Caucus, in the 1970s.  They also failed to enact strong labor law reform that might have prevented the decline of labor unions then just beginning, and now nearly complete.  Cowie lays the blame for those failures at the feet of newly elected neo-liberal Democrats in Congress, but especially President Jimmy Carter.  In the defeat of the labor bill, Cowie writes, "one could hear the death rattle of American working class power." (298).

In a segment on the PBS NewsHour this week, James Bessenger of the South Carolina Secessionist Party and Jonathan Thrower of the Charleston Black Nationalist Movement said they were getting together to talk things out and work together for the public good. They looked and spoke like decent working class guys. Thrower, somewhat cryptically, said that in discussions about racial tensions in Charleston, "There are people who don't actually see it as a race issue, it is also looked at as a class issue, because classism is an issue also, more-so as race."  Cedric Johnson, who teaches in the African American Studies Department at Maryland University, argues that the best hope for black progress is an interracial working class alliance for common interests.  He cites historical examples such as the Readjuster Party in Virginia during Reconstruction, the Populist Party, and the Knights of Labor.  Perhaps Bessenger and Thrower will find some common class interests and a cause more significant than flags and statues to unite behind. After all, as Thrower said, "taking down a statue does not end systematic oppression, whether it's classism or racism." 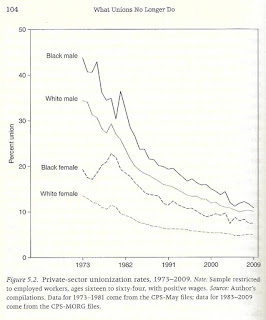