Is Democracy Worth Saving? 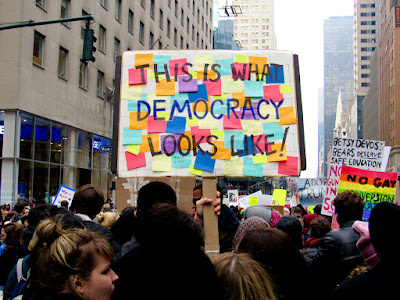 Pundits and scholars have been wringing their hands of late over what they see as the decline of Democracy. The rise of authoritarian populists in many democratic nations is seen as a warning sign that democracy is in deep trouble. Opinion polls including a World Values Survey have shown a global decline in support for democracy.  According to Freedom House, 2016 was the 11th consecutive year of decline in global freedom.  Maybe the 24 percent of millennials who said that “having a democratic political system is a bad or very bad way to run this country" have a point. Perhaps democracy is not worth saving.

In his best-selling book, Between the World and Me, Ta-Nehisi Coates pins the blame for the plight of African-Americans in this country on democracy. Like slavery and Jim Crow, our contemporary race problems “are the product of democratic will. . . .  The problem with the police is not that they are fascist pigs but that our country is ruled by majoritarian pigs” (6-7, 79). Do the police shoot black men because that is what a majority of the American electorate want them to do?

Coates seems actually to be in agreement with the founding fathers, who also did not have a high opinion of majoritarian democracy. As James Madison, the main author of the Constitution said, “in a pure democracy, there is nothing to check the inducement to sacrifice the weaker party or the obnoxious individual.” Thus, he and his cohorts at the Philadelphia convention inserted many features into their new frame of government to thwart rule of the majority and these features have worked as planned. Consider the electoral college. In the past 17 years it has given us two presidents who lost the popular vote. The Three Fifths Clause gave extra power to the slave holding class who made up a distinct minority of white voters in the antebellum South (as of 1860, 75 percent of white Southerners owned no slaves at all), but who controlled Southern politics. And while the House of Representatives is the only federal body based on proportional representation of the population, the Constitution gives veto power to three other less democratically selected branches of the government: the Supreme Court, the President, and the Senate, none of which was directly elected by the people in the original Constitution.

For an essay on Madison’s purpose in writing the Constitution, as outlined in Federalist Paper #10, see this piece by Richard Kreitner.

Surely, Coates is correct, that the white majority cannot always be counted on to protect the rights of racial and other minority groups. But would a more democratic system of government have been any worse for African Americans? Consider the Tallmadge Amendment. In 1819 James Tallmadge, a Congressman from New York proposed an amendment to a bill admitting Missouri to the Union. It


provided, that the further introduction of slavery or involuntary servitude be prohibited [in Missiouri], except for the punishment of crimes, whereof the party shall have been fully convicted; and that all children born within the said State, after the admission thereof into the Union, shall be free at the age of twenty-five years.

Even though slave states had extra representation because of the Three Fifths Clause, the motion passed in the House of Representatives by a narrow vote of 82 to 78. But because slave states and free states had equal representation in the undemocratic Senate, the bill failed there.  The 18 Northern Congressmen who supported admission of Missouri as a slave state a year later under the Missouri Compromise “fared badly in the next election” (See What God Hath Wrought, 152).

According to Columbia economist Jeffrey Sachs, the problem with American democracy today is not polarization or an evil electorate, but that the people don’t actually control the government. “On every issue, the dominant reality is not public polarization, but broad public consensus,” he writes. Healthy majorities (60-40 or greater) support progressive policies on issues ranging from climate change to inequality. In a poll taken in 2016, 61 percent of voters supported requiring a special prosecutor to investigate killings by police—apparent support for the agenda of Black Lives Matter.

So why do we have a government dominated by conservative Republicans at virtually every level of state and federal government? Sachs blames lobbying and propaganda. Lobbyists from the finance, oil, military, and health care industries, he notes, spend about $1.5 billion annually in lobbying and another $1.5 billion funding campaigns.  If Sachs is right, instead of raising doubts about democracy, advocates for racial justice like Coates should focus on supporting reforms that would make the system more responsive to the actual will of the people.

And the problem is not just the Senate, the most malapportioned legislative body in the world, but also a host of other undemocratic elements built into the Constitution--like a court made up of nine unelected judges with lifetime appointments who can invalidate any law that has passed the House and Senate and gotten the president's signature.  Here is a book that looks at how the Supreme Court, the least democratic branch of the federal government, has been the most hostile to the rights of African Americans and the values of democracy:  Injustices: The Supreme Court's History of Comforting the Comfortable and Afflicting the Afflicted.  The title says it all.
Posted by Bill Jordan at 10:59 AM

Email ThisBlogThis!Share to TwitterShare to FacebookShare to Pinterest
Labels: Human agency in history