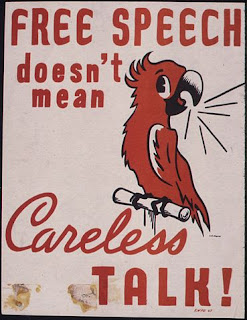 In their reporting on the rally and counter-protest on Boston Common Saturday (Aug. 19, 2017), the Boston Globe and local TV stations covering the event put quote makes around "free speech" as in "free speech" rally (Fox News, by the way, didn't bother with the quote marks).

In the lead-up to the Rally I had been reading stories in the Globe about the 23-year-old organizer who insisted that it really was going to be a free speech rally, not a white supremacist rally.  But when I tuned in to watch coverage on Saturday I couldn't tell if it was a free speech or a "free speech" rally, because reporters and video crews were not allowed into the cordoned off area where police had contained the speakers.

In this country there has never been an absolute right to freedom of speech--but there has been an ever-expanding circle of protected speech.  You can still be sued for libel, but political opinions now enjoy almost complete protection--at least from limits imposed by the government.  In the past, restrictions on speech have been used most often against activists on the left--socialists and pacifists during and after World War I, liberals and other leftists during the McCarthy era.  We look back on those persecutions and prosecutions now as mistakes we have learned from.  We believe that in a democracy it is essential to listen to our political opponents.  In their influential book on the Political Classroom, Diana Hess and Paula McAvoy write "political discussions are an essential part of  learning to live in a democracy.  Mastering the ability to talk across political and ideological differences helps create an informed citizenry--an essential component of a democratic society--by teaching students to weigh evidence, consider competing views, form an opinion, articulate that opinion, and respond to those who disagree" (4-5).

Have Americans lost the ability to talk across political difference?  Where is the line between valid conservative opinion and racist hate speech?  When should we listen to our political opponents and when should we just try to shut them up?

The conservative Globe columnist, Jeff Jacoby, argued that the rally on the common really was a free speech rally and that police and counter demonstrators were wrong to stifle it. "It was not a 'good thing' that people with a right to speak were effectively silenced by the operations of the police. The ralliers did nothing wrong. They followed the city’s rules. They absorbed the slanders flung at them by the mayor and others. They didn’t try to shut their critics down, and they weren’t the ones hurling 'urine, bottles, and other harmful projectiles.'” Some of these Globe photos show counter demonstrators violently confronting free speech ralliers.  Joan Vennochi accepted the "free speech" interpretation of the rally, but she reminded us that the Supreme Court has interpreted the First Amendment to mean that "speech may not be banned on the ground that it expresses ideas that offend."  And the tactics of the counter protesters worried her.  She wrote:  "the sight of a young man wearing a red, white, and blue helmet, encircled by a crowd of protesters screeching 'shame, shame, shame,' raises questions about tactics. The last thing an anti-hate movement should want to do is stoke sympathy for those they identify as haters."

This piece in the New York Times by a critical race theorist took the ACLU to task for representing Unite the Right in their court battle for a permit to assemble in Charlottesville. The organization should focus its attention on more significant threats to free speech on behalf of more worthy subjects, the author says. That reminded me of something I had read a while back by Adam Gopnick in the New Yorker. In "Two Views on Speech" he compares America with other western nations in their approach to free speech.


The absolutist American view, let’s stipulate at once, still has much to be said for it. It says that once the state gets into the business of distinguishing acceptable dissent from unacceptable dissent then what we have is no longer dissent. Instead, we have state-sponsored and defined dissent, like that of the tiny “dissident” parties that were allowed to persist, once upon a time, in Eastern Europe, pendant to the chief Communist one. As John Stuart Mill said, in what is still the greatest defense of freedom of speech ever written, the free contest of ideas, even bad ones, is necessary to discover the truth of things. Or, to borrow a turn of phrase from the N.R.A.: it takes a good man with a pencil to stop a bad man with a pen.

But the view that governs the opposite position, in Canada and Europe alike, is not irrational or truly hostile to liberty. The laws and rules vary, but all have a simple distinction at their core, which is that criticizing an ideology, including a religious ideology, however vociferously, is different from inducing hatred of a people or persons. In plain English, hate-speech laws are based on the simple truth that there is a huge difference between an insult and a threat, and that it isn’t actually that hard to tell one from the other.

Should we move toward a more European approach?  Before we do, we might want to look back at the source of our view, Oliver Wendell Holmes' famous dissent in Abrams v. United States, in 1919:


Persecution for the expression of opinions seems to me perfectly logical. If you have no doubt of your premises or your power, and want a certain result with all your heart, you naturally express your wishes in law, and sweep away all opposition. To allow opposition by speech seems to indicate that you think the speech impotent, as when a man says that he has squared the circle, or that you do not care wholeheartedly for the result, or that you doubt either your power or your premises. But when men have realized that time has upset many fighting faiths, they may come to believe even more than they believe the very foundations of their own conduct that the ultimate good desired is better reached by free trade in ideas -- that the best test of truth is the power of the thought to get itself accepted in the competition of the market, and that truth is the only ground upon which their wishes safely can be carried out. That, at any rate, is the theory of our Constitution. It is an experiment, as all life is an experiment. Every year, if not every day, we have to wager our salvation upon some prophecy based upon imperfect knowledge. While that experiment is part of our system, I think that we should be eternally vigilant against attempts to check the expression of opinions that we loathe and believe to be fraught with death, unless they so imminently threaten immediate interference with the lawful and pressing purposes of the law that an immediate check is required to save the country.

A recent book on Holmes' famous free speech manifesto/dissent is favorably reviewed in this Atlantic piece. Holmes' quote asks us to consider the question that I think is the most important question for citizens in a democracy to ask themselves every day: "Could I be wrong?" It's a question too many people seem increasingly unwilling to consider.

After the election, my liberal friends and I were shocked that so many of our fellow Americans could vote for Donald Trump, who just seemed so obviously unqualified and so retrograde in his views.  Many of us pledged to get out of our bubble and try to understand what was going on in Trump's America.  But Charlottesville suggests we are all still safely ensconced in our separate bubbles.   Diane Hessan has been in weekly contact with 200 Hillary voters and 200 Trump voters since the election.  A Clinton voter reflecting on Trump's response to the violence in Charlottesville, said "there is just no one who can defend his behavior at this point."  Wrong.  Trump voters think the "media and elites" have blown Trump's comments out of proportion and that they assume "anyone wearing a 'Make America Great Again' cap is to blame for all the hatred."  Of her 200 Trump voters, only 4 now regret their vote and most of them feel that Trump is doing a good job of honoring his promises.

More views on free speech and the Boston Common protests from Globe letter writers.
Posted by Bill Jordan at 11:09 AM