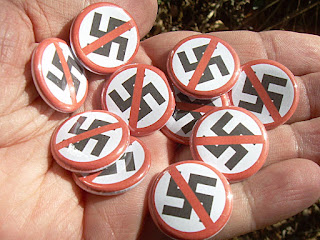 On Fox News, Antifa is a grave threat to freedom of speech, peaceful assembly, and liberal democratic values:

Joey Gibson of Patriot Prayer said he and several "moderate liberals" preaching "love, unity and peace" had to cancel a rally in Berkeley after Antifa "stormed" the public park.

According to a Dartmouth Professor cited in this Vox article, they are nipping fascism in the bud, fighting fire with fire, etc.:

The original fascist groups that later seized power in Europe started out very small. You cannot, they argue, treat these groups lightly. You need to take them with the utmost seriousness, and the way to prevent them from growing is to prevent them from having even the first step toward becoming normalized in society.

Antifa: scourge of free speech or bulwark against the rise of fascism?
Posted by Bill Jordan at 10:56 PM