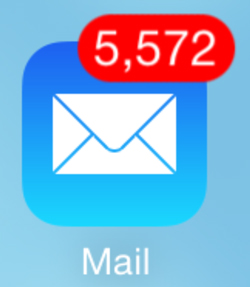 Dear sender: I have set up my email account to automatically delete every incoming message.  I apologize for any inconvenience.
Posted by Bill Jordan at 7:55 AM 2 comments:

Email ThisBlogThis!Share to TwitterShare to FacebookShare to Pinterest
Labels: Modernity

The Fragility of Modern Families

It’s all of 7:30 a.m. and the sun still hasn’t made an appearance. The outside temperature is 3 degrees below zero. I’ve been sitting here watching my photos scroll past on the laptop. It’s a slideshow that picks photos from my hard drive at random—the kids when they were tweens; the kids when they were toddlers; the trip to Wyoming, Christmas 2010. . . . . They are all good times and almost all family times. You don’t take pictures when the car breaks down, and you rarely take them at work, even if you spend more of your time and energy there. Also, raising a family is difficult—sometimes there is stress. Sometimes there is shouting. Sometimes you can’t believe what you’ve gotten yourself into. None of that makes its way into the photos.

As I watch our family history flash by, I'm grateful the kids are all home this holiday, but feeling a little wistful that in about a month, our oldest will turn 24; our youngest will be off at college, half a day’s drive away. When we dropped the twins off at their dorms this summer it felt like the end of something—was it the end our modern family?

Well, no, of course not. We've had a lovely holiday, with lots of time together. My friend Tom’s only daughter had just two days off, so she flew in from Chicago for just a brief visit. Our girls are here for a number of weeks. So we’re lucky, but I do wonder how our family will evolve down the road. I’m hoping that we end up more like one of the many families you see on TV.

In "Modern Family," for instance, everyone ended up living close by, just a few minutes’ drive away from each other. In that show, cousins are like siblings. Aunts and uncles and grandparents babysit. They’re always popping in on each other and they get together in every episode. Most sitcoms are like that. Somehow, extended families stick together. I wonder how they managed to work that out. Frankly, it doesn’t seem all that modern.

I’ve been lucky. My siblings and I all live within an hour or so of each other. But we don’t live in the same town and that hour drive means there’s not much “popping in” or babysitting. Still, we’re way better off than most of my cosmopolitan acquaintances, like Tom, who have to get on a plane to see members of their extended family.

Working class folks have a better shot, it seems, at ending up close by. If you work in the factory, you might get your son or daughter a job there. But then all the factories are closing. If you send them off to college in some distant state, as in the recent film, Lady Bird, chances are, they aren’t going to come back to live in your town. College educated professionals have to go where the jobs are for the most part. Maybe that’s why the mother in that film freaks out when she drops her college-bound daughter off at the airport. The mother in Boyhood also has the realization that her family life, as she’s known it, is coming to an abrupt end on the day her son, Mason, leaves for college. “This is the worst day of my life,” she sobs. “I just thought there would be more.”

What are the odds that Mason or Lady Bird will end up living nearby, within a short drive? And in what sense are you any kind of a family if you see each other just two or three, or even five or six times a year. How many plane tickets can you afford? Is electronic communication enough?

The tenuousness of family life, it seems to me, is one of the things included in what Richard Hofstadter called the “tormenting manifestations of our modern predicament” (42). The loss of profound family “communion across generations”—and the feelings of social and psychological security that come with it—leaves us with a deep sense of anomie, what Mark S. Weiner refers to as a persistent “ache for everything that is lost” in the transition from traditional clan-based societies to modern individualistic societies (167-8). I’ve been reading Weiner’s book, The Rule of the Clan and Hofstadter’s book, Anti-intellectualism in American Life, over the holidays.

Hofstadter shows, in part, that intellectuals are seen as responsible for imposing modernism on everyone else, and so have attracted the hatred of all.

Through most of our history, Weiner argues, humans have lived in big extended families, tied to a particular geographical area. Those societies are characterized by “communal warmth,” intense social bonds, solidarity and security. For modern liberal societies to form, “it is necessary to ‘cut the ties of kinship’—to create a cultural identity that, while not replacing family bonds, trumps their significance, and that displaces the authority of the extended family with the revolutionary, individuating power of the nuclear family.”

It’s a complicated story, but when you think about it, there are an awful lot of obstacles to the maintenance of family ties beyond (and even within) the nuclear family. Weiner argues that at the center of our modern societies is an ethos of individualism that is at odds with the ethos of solidarity at the heart of traditional clan-based societies that keeps families together. The individualistic ethos was on full display in Lady Bird. When asked if Lady Bird is her given name, the title character answers yes, “I gave it to myself, it was given to me by me.” Weiner argues that the ache for solidarity is always with us, though, and the film ends with Lady Bird in her dorm room in New York City recalling her hometown with fondness and introducing herself to new acquaintances as “Christine,” the name her parents gave her.

Liberal societies will fail if we do not find decent substitutes for the solidarity of traditional clans, Weiner argues. We need unions, clubs, bowling leagues, organizations of various kinds, and above all, nation states to fulfill the functions of clans, to hold us together, and to reduce the sense of anomie that arises in the absence of strong extended families and traditional culture.

Other books I’m reading also address this problem in different ways. In More than Just Race, William Julius Wilson considers the relative importance of culture and social structure in causing poverty. Conservatives like J. D. Vance would have us believe that poverty could be solved if individuals would just act differently—according to more appropriate cultural norms. But Wilson references extensive social science research that shows structural factors (economics, demographics, public policy) have a much greater impact and in fact cause the dysfunctional cultural practices that Vance puts at the root of poverty. Wilson calls for the kinds of collectivist or state-sponsored structural adjustments that Weiner might say are necessary to preserve liberal modernity against that ache of individualism.

Finally, in her book, Radical Happiness, Lynne Segal, notes that as policy makers and yoga instructors, retailers and psychologists, HR departments and pharmaceutical companies promote ever more paths toward individual fulfillment and happiness, we see “precipitously rising rates of anxiety and depression” (Kindle version, location 80). The reason, she says, is that we are overemphasizing individual causes of unhappiness and underestimating social causes. We need to shift our focus from private happiness to what Hannah Arendt called “public happiness” (127). Segal's prescription calls for involvement in movements for social change and political activism. For one thing, only social change can address the structural and social causes of our depression and anxiety (which are perhaps a greater source of our misery than our own individual craziness), and at the same time the very act of bonding with others in a political crusade is psychologically therapeutic for the individuals involved.