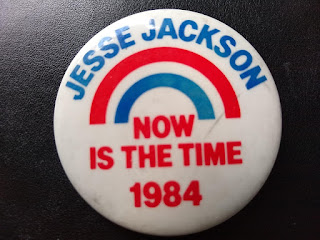 Sometime around New Year ’s Day, 2020, I found this Jesse Jackson campaign button during a casual stroll through the BAD ART store in Littleton, NH. Jackson visited Lowell, Massachusetts during his bid for the Democratic Party presidential nomination in 1984. My friend, the legendary history and political science Professor, Dean Bergeron, hosted Jackson at the university when he campaign in the city. I was finishing up my undergraduate degree that year and I got to join Jackson’s entourage as he made the rounds. Sadly, that was before the era of selfies, or else I’d have a better memento of that day, like the one I got this year with Liz Warren. All I got was a handshake from Jackson, but now I have this button.

Jackson’s candidacy that year was considered a hopeless long-shot—or rather, a long-shot based on nothing BUT hope, kind of like Bernie Sanders in 2016.

When I think back over the many presidential elections I’ve lived through, it seems that they all have been contests over who could come up with the most compelling vision of hope for the future. There was Reagan’s morning in American (also: “Make America Great Again”), and in 1992, Bill Clinton promised to “bring hope back to the American Dream.” Then, of course there was the iconic Shepard Fairey Obama “Hope” campaign poster. The best line of the 2020 Democratic debates was Elizabeth Warren’s zinger, directed at John Delaney: “I don’t understand why anybody goes to all the trouble of running for president of the United States just to talk about what we really can’t do and shouldn’t fight for. I don’t get it.” No candidate has ever identified so many things to hope for in such concrete and specific detail as Warren, I think.

In 1988, Jackson ran again, this time making hope his dominant theme with the slogan, “Keep Hope Alive.” His stirring convention speech that year overshadowed the nominee, Michael Dukakis, and anticipated some of my own questions about hope. “Face reality, yes, but don’t stop with the way things are. Dream of things as they ought to be,” Jackson said. “Don’t surrender to cynicism.”

What is the relationship between hope and reality? What happens when hopes are raised, but not fulfilled? Should we direct our anger about unfulfilled hopes at the politicians who raised them, or at the system that defeated them? Have all the hopes and dreams that we voted for done us any good? How should we evaluate the hopes candidates are throwing at us this year? What are the similarities and differences between having hope in our personal lives and collective, political hope? How do we even know what to hope for?

These are some the questions that I ran into after the new year, as I watched the democratic primaries unfold this year and tried to write about hope.  It led to one ever-expanding essay that just wouldn't end, so I've tried to break it up into smaller units and HOPE that a conclusion will come to me after I've posted what I have so far.  If you would like to help shape that ending, please feel free to add your own thoughts in the comments.

Next: A compelling theory of political hope. You can read Hope Essay #1 here.
Posted by Bill Jordan at 5:59 AM