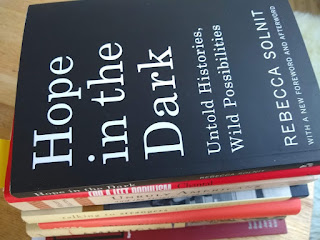 In 2019 I discovered a book that makes a pretty good case for a certain kind of hope. Hope in the Dark: Untold Histories, Wild Possibilities, by Rebecca Solnit, takes its title from Virginia Woolf, who wrote these tentatively hopeful words in her journal during one of the most ominous moments of the 20th century, the early days of the First World War: “The future is dark, which is on the whole, the best thing the future can be, I think.” By dark, Solnit argues, Woolf meant unknown, not bad.  Woolf was not siding with optimists who thought the war would be over swiftly and gloriously, or pessimists who somehow foresaw the horrors of trench warfare.  It was a recognition of ignorance, and the impossibility of predicting the future, which, again and again delivers the unexpected. Much of it is unexpectedly awful, like the current pandemic; but it can be unexpectedly good, too.

Pessimists, Solnit writes, tend to forget or take for granted past advancements that were unexpected and unforeseeable. They need to open their minds to the possibility that the worst outcomes are not inevitable and recall forgotten times (“untold histories”) when progress seemed impossible right before it happened. During the aughts, when states were passing referendums “protecting” marriage from same same-sex couples, who could have expected gay marriage to become legal throughout the land as early as 2015?

Once you let go of the certainty of future doom you lose your best excuse for apathy and inaction, she writes. “In the spaciousness of uncertainty is room to act. When you recognize uncertainty, you recognize that you may be able to influence the outcomes—you alone or you in concert with a few dozen or several million others.” Nor does Solnit let the positive thinkers—optimists who “think it will all be fine without our involvement”—off the hook. The good guys never win by default. They must act, and hope is useless if not accompanied by a “belief that what we do matters even though how and when it may matter, who and what it may impact, are not things we can know beforehand” (xiv).

The problem with both optimists and pessimists is they fail to realize that they can’t really—really—know anything. My graduate advisor, Harvard Sitkoff once told me about an idea for a book that he would probably never get around to writing (a prediction that so far has come true—but who knows?). The title would be “The Future That Never Was,” and it would be an amusing catalogue of the predictions that look ridiculous in hindsight—like flying cars. No one knows better than historians how futile it is to predict the future, since we can’t even agree on what happened in the past. And of course journalists seem pretty divided about the present, too.

But wait, shouldn’t this “epistemic humility” make us pause before jumping on the bandwagon of some scheme to improve the world? Shouldn’t we have some uncertainty about our own ability to determine which actions are best designed to bring about which future? Every time people try to improve things, we seem to create worse problems. Jared Diamond claims adoption of agriculture is the “greatest mistake humans ever made.”   Fossil fuels kept us warm for centuries, made us more mobile, and then gave us traffic jams, pavement, the scourge of plastics, and a warming planet. Every successful liberal reform in American history, it seems, has led to a backlash that may have had an even greater impact. The reform and protest movements of maybe five years in the Sixties have been followed by 50 years of backlash. For every Abbie Hoffman then there are 50 conservative radio shows now. Unintended consequences have dogged reformers throughout history.

So maybe conservatives are right some times. Solnit embraces epistemic humility about WHAT will happen in the future, but not about what SHOULD happen. I’m not always so sure. I admire the caution, born also of uncertainty, expressed by the British legislator Edmund Burke, a critic of the French Revolution, and an inspiration to American conservatives. When formulating reform legislation in Parliament, he said, “I set out with a perfect distrust of my own abilities; a total renunciation of every speculation of my own; and with a profound reverence for the wisdom of our ancestors” (Levin, 141). It seems to me that we need more of that kind of uncertainty on both the right and left, but it seems increasingly in short supply as we construct social media environments filled with people and publicans that share our values and opinions.

I encountered the value of epistemic humility while working in two fields—journalism and teaching. My first job out of college was as newspaper reporter, a job that requires fairness and impartiality. I admired the recently deceased PBS News anchor, Jim Lehrer, who was said to be so intent on cultivating an even-handed, non-partisan attitude that he refrained from voting. His unchallengeable reputation for fairness is why he was asked to moderate 12 presidential debates. Journalists like Lehrer were a gift to the democratic process and to the reputation of a free and impartial press that people on both sides trusted. They are increasingly rare, and their absence is a loss for democratic culture, which cannot function without compromise, which becomes more difficult as we all become more and more certain—not only that we are right about the best future, but that it is the only morally acceptable future.

I left journalism and now find myself teaching history and politics at a school in which most teachers and students are one kind of liberal or another, and the few conservatives are mostly afraid to express their views for fear of scolding, ostracism or retaliation. I feel a professional and a moral obligation to protect my conservative students and foster a classroom environment in which they feel safe to express their views. Not only is that fair to conservative students, but it improves the civic education of students who lean left too.

Research shows that students who learn about politics along with only like-minded peers are more “susceptible to becoming politically intolerant.” Education researchers Diana Hess and Paula McAvoy have found that “people who talk in like-minded groups rarely discuss the ideas held by their opponents, and they likely do not consider the question ‘Could we be wrong?’ Instead, they reaffirm each other’s views and move opinions within the group toward polarized extremes.” (Political Classroom, 148). I believe that democratic education requires us to teach “cognitive empathy” —the ability to understand opponents’ points of view, so I do everything I can to encourage conservative students’ participation in our classroom discussions, and to assign readings that take conservative ideas seriously.

I’ve also been learning about the mental roadblocks we all have to cognitive empathy—cognitive distortions, motivated reasoning, backfire effect, and such. Wikipedia lists 188 cognitive biases, and that entry includes a graphic, the Cognitive Bias Codex, which I’ve printed and hung on my classroom wall. Jonathan Haidt’s book, The Righteous Mind explains the moral basis of conservative and liberal beliefs and argues that liberals have a harder time understanding conservative morality than conservatives do of understanding liberal morality.

All of this leads me to more questions, and the subject of my next Hope Essay (#4).   Solnit’s book is a call to action, but if we can’t know, how can we act? And should we act?

Yuval Levin, The Great Debate: Edmund Burke, Thomas Paine, and the Birth of Right and Left (2013).

Jonathan Haidt, The Righteous Mind: Why Good People Are Divided by Politics and Religion (2012).

Email ThisBlogThis!Share to TwitterShare to FacebookShare to Pinterest
Labels: epistemic humility, Hope, Human agency in history, I could be wrong