People Power in Dark Times: Black Newspapers during the Nadir 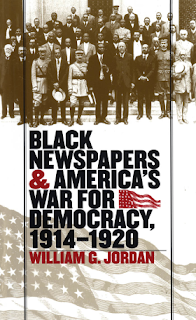 Shortly before the New Year, 2017, a caller to the Diane Rhem show asked Ta-Nehisi Coates if he could offer any reason for optimism in the coming years of the Trump administration. No, Coates answered, but we should look for inspiration to the past, to African Americans’ long and uplifting history of struggle. That is an important message, not just for African Americans but for all of us human beings. Progress requires struggle even, or maybe especially, in times of regression.

My 2001 book, Black Newspapers and America's War for Democracy, 1914 to 1920, is the story of crusading black journalists, editors and publishers who were part of the struggle Coates praised. They stood up and spoke out when everything about the times told them to sit down and shut up. Black newspapers fought for civil rights and racial equality all throughout the period in American history known as the Nadir, 1890-1940, when the tide of history had turned brutally against African Americans. Although black activism would not have a major impact on race relations until the Civil Rights movement of the 1950s and 60s, their efforts were not in vain—they bore some fruit in the short term and more importantly they sustained a rich protest tradition and passed it down to activists who would have greater success under more favorable conditions later on.

In a time when it was not unusual for assertive black activists to be attacked and killed and when hundreds of black people were brutally lynched every year, and when the dominant ideology of the time said that political activism was futile, these courageous and stubborn individuals stood up and demanded that America live up to its democratic ideas, often at great risk to themselves. For example, William Monroe Trotter gave up a prosperous real estate business to publish his weekly newspaper, The Guardian, of Boston, which he used to agitate unceasingly for civil rights. Jesse Duke and Ida Wells had to flee the South after they denounced lynching in their newspapers. W.E.B. Du Bois put his academic career on hold to crusade for black rights as an editor of the NAACP’s journal, The Crisis.

Instead of risking life and limb and sacrificing their own personal ambitions to fight for the collective interest of their group, these individuals might have followed the advice of Booker T. Washington, who embodied the reigning spirit of the times when he called on black people to cease their agitation for civil, legal, and political group rights and instead focus on individual economic advancement. The head of Tuskegee Institute, a black college in Alabama, Washington exerted enormous influence in those years. He embraced America’s civic religion—Social Darwinism, a fundamentalist faith in the inevitability of progress through the mechanisms of the free market and survival of the fittest. The free market would assure that the most qualified individuals would rise to the top and their leadership would bring about progress for the rest of humanity. Washington applied this logic to the black race in America: “No race that has anything to contribute to the markets of the world is long in any degree ostracized,” he said in his Atlanta Exposition Address in 1895. Any attempt to interfere with this process through legislation that gave an advantage to weaker or less capable individuals would hamper this progress to the detriment of society. The most influential spokesman for this absolute faith in the power of unfettered economic and social forces to bring about positive progress, William Graham Sumner, said:


The great stream of time and earthly things will sweep on just the same in spite of us. . . .  Every one of us is a child of his age and cannot get out of it. He is in the stream and is swept along with it. All his science and philosophy come to him out of it. Therefore, the tide will not be changed by us. It will swallow up both us and our experiments.

The men and women of the black press rejected this precept. Instead they subscribed to a view that human beings are not helpless flotsam in the stream of history. This view had been reinforced by specific events in American history, including the American Revolution, the emancipation of the slaves, and the Civil Rights Movement, each of which would never have happened without the positive actions of living people, actions that required shrewd strategizing and courageous self-sacrifice. It may be that they were acting against a powerful tide in those years of the nadir, and that their efforts did little to advance freedom and equality in the short term. In fact, during World War I, some federal government agents said the black press was guilty of sedition and recommended suppression and prosecution. But as I show in my book, the publishers of these newspapers did not back down and their stubborn persistence made a difference. Their unrelenting protest against lynching as a violation of basic American principles helped to invigorate an anti-lynching movement that was at least partially responsible for a decline in Southern lynchings beginning in the 1920s. A conference of black newspaper editors in Washington D.C. in 1918 had persuaded President Wilson to make a strong statement against lynching, condemning it as anti-American and as a hindrance to the war effort. In addition, the military agreed to mitigate some of the worst discriminatory practices against blacks in the armed services. The war ended before most of the editors’ demands could be addressed, however.

Such tangible gains were far less important than the way black newspapers kept alive a tradition of protest that would one day have a dramatic impact on American democracy. The Civil Rights Movement would lead to a revolution in race relations not because of the inevitable tides of history but because of the courage of individuals who sacrificed personal ambition and put their lives on the line. As Martin Luther King Jr., put it:


Change does not roll in on the wheels of inevitability, but comes through continuous struggle. And so we must straighten our backs and work for our freedom. A man can't ride you unless your back is bent.

The lesson for all of us is that we don't have to passively except what history dishes out. Even when the odds are against us and the forces of reaction seem to be chipping away at previous gains, it is not pointless to stand up and work for a better world. It’s a lesson that has great relevance as we contemplate the start of a new and reactionary administration--not just for African Americans but for all of us who believe in democratic values and social progress. Buy the book!
Posted by Bill Jordan at 5:27 PM