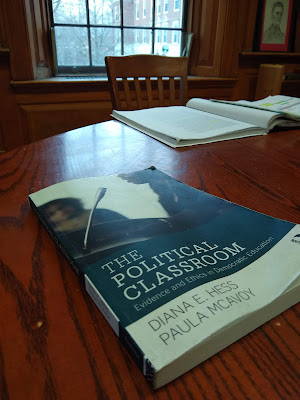 The nation’s schools seem to be dividing themselves into two camps: anti-racist and anti-critical race theory. On one side, some schools, like the one I teach at, are declaring themselves to be “anti-racist schools,” on the other they are banning books like the one that has emerged as the bible of anti-racism, Ibram Kendi’s How to Be an Antiracist.

If we put the best face on both positions, we would conclude that anti-racist schools are not seeking to brainwash students with Marxist theories, and anti-CRT schools are not committed to maintaining a system of white supremacy. Rather, one side wants students to be taught that democratic values are incompatible with bigotry; the other, that schools should not be sites of political indoctrination.

We should all be able to agree with both of those propositions, which are not necessarily in conflict. I believe that my school is well positioned to offer a model for how to bridge the gap between the two sides and reduce the polarization that is tearing our nation, and our schools, apart. It has always been an article of faith, in my experience, that the intellectual autonomy of our students is the sine qua non of the "Harkness method"—which is used in every class at Phillips Exeter Academy.  We teach our students how to think and deliberate, not what to think. One of the great insults you could throw at a teacher in my department (history), was that their class was “Socratic”—that is, that you were leading them to a foregone conclusion. Our questions were supposed to be open to different answers.

I do worry, though, that in our zeal to become an anti-racist school, there is some danger of betraying this value. I’ve heard some colleagues say that the goal of the school should be to advance “social justice,” and instead of challenging those statements, the administration has seemed at times to endorse them.

Perhaps they consider social justice and anti-racism to be non-partisan moral goods and that any objections to them are morally indefensible and should be beyond the pale in our classrooms. But “social justice” and “antiracism” are meaningless terms until you connect them to specific policies and they have become attached to partisan policy agendas that only a small segment of the American electorate support in total (see the Hidden Tribes survey).

(How do teachers decide what is beyond the pale?)

Although I share the policy aims of much of what comes under the rubric of those terms, lots of Americans do not. And they can’t all be white supremacists. For example depending on how the question is asked, as many as 73 percent of Americans say they are opposed to affirmative action, a policy that would be at the top of most progressive activists’ list of anti-racism policies.  I’ve written a very long blog post on the diversity of thought among Black intellectuals, some of whom also oppose affirmative action, and many of whom disagree with the most popular anti-racist thinkers of the moment—Kendi, Ta Nehisi Coates, Robin DiAngelo.  We can’t write off huge swaths of the American electorate as morally illegitimate and put their views beyond the pale of what can be discussed.

One place we might look for a way to bridge the divide between the best versions of anti-racism and anti-CRT, is a guide that has been my bible for teaching politics in the classroom: The Political Classroom: Evidence and Ethics in Democratic Education, by Paula McAvoy and Diana Hess. The book revolves around this question: “how can educators teach young people about politics in such a way that schools do not become partisan institutions?”

Unlike the theory-laden, top-down nature of most currently fashionable approaches to anti-racism they base their conclusions on concrete evidence gathered through numerous case studies of what happens in actual classrooms, how students engage with politics and the impact of various teaching strategies. They spoke with students and teachers, conducted surveys, observed classes, and their book is full of case studies and the recommendations of students and teachers taken from their research. Their conclusions come from the ground-up, pieced together from engaged students and skilled teachers with deep knowledge of public policy and many years of experience teaching students about democracy and its values.

The book confronts the ethical dilemmas and complexity of teaching politics to young people and the authors do not offer easy answers. It’s a Harkness approach, not a Socratic one. Often, they conclude that a problem has no one-size-fits-all solution and that individual teachers will need to arrive at their own solutions using their own judgements. For example, in a chapter on whether or not teachers should disclose their own political views, they found that teachers they studied were evenly divided on the question and that there were good arguments on both sides. Instead of picking a side, they gave a list of compelling pros and cons so readers could make up their own minds.

Still, they arrive at some important conclusions about the aims and methods of political education. First and foremost, teachers should foster intellectual and political autonomy. And students should learn skills of deliberation—how to engage with fellow citizens who hold opposing views and how to do it in a civil manner.

Here are some of their other topics and conclusions (quotes are taken from the book’s website, unless otherwise indicated by page numbers of the book):

Many of the schools that are embracing the anti-racist mission seem to be using a different guide to teaching politics: Kendi's How to be an Antiracist, which became a number one best seller during the George Floyd protests in the summer of 2020.  Kendi had been the keynote speaker at my school’s annual MLK day celebration in January of that year and the administration had distributed copies of his book to any teacher who would take one.

Kendi has argued that every public policy and every idea is either racist or antiracist. There is no such thing as not racist.

If you accept this dichotomous premise, then to be a proper antiracist you need to figure out whether any policy or idea supports or opposes racism and get on the right side of it. Kendi doesn’t want every individual to make that determination for themselves but rather, we should rely on the opinions of “experts.”

He has advocated the establishment of an unelected branch of government, made up of “formally trained experts on racism,” who would have veto power over any new policy enacted by any governmental body from the local school committee all the way up to Congress. He promotes this Department of Antiracism as a way to “fix politics,” but it strikes me as a way to eliminate politics.

According to his reasoning, just about every conservative policy idea is racist, and so by extension, presumably, is the Republican Party and its supporters. Not only that, but Democrats don’t all agree on every policy--so some of them must be supporters of racist policies.

Can we deliberate with people who support racist policies? Is there room for compromise? Can we see their demands as legitimate? Can we accept their electoral victories? Politics requires that we do. Does anti-racism require that we do not?

As far as I can tell, my school continues, for the most part, to be a site of good political teaching, where  teachers have autonomy over the content of their syllabi but refrain from indoctrinating them into any particular partisan or ideological point of view, and students can express their views in the classroom, even if the social cost of dissent may be on the rise, leading to some self-censorship.  I hope that our efforts to become an anti-racist school will not be guided by authoritarian theories and top-down methods.

I worry a little bit, though, about item number 8 of the Trustees’ list of 12 steps to make Exeter anti-racist.  It calls for creation of “a new cross-department faculty working group to focus on incorporating themes of race, equity and justice into the curriculum of each department.” So far I’m not familiar with the work of this group, if it has indeed been established, and it hasn’t affected my teaching.

But it sounds potentially analogous to Kendi’s proposed Department of Education and maybe also the  state legislatures that passed anti-CRT laws. If we are to remain true to our educational principles, the Trustees should reconsider the wisdom of having such a committee; dichotomous thinking, political litmus tests, and delegation of control to appointed “experts” are very anti-Harkness and un-Exonian. But if we must have it, I hope that it will be guided by the values implicit in The Political Classroom that have guided our school at least since the Harkness gift—respecting the intelligence of both students and faculty, and embracing collaboration, epistemic humility, open inquiry, and tolerance of dissenting views.

RELATED SOURCE: Helen Pluckrose, "Should We Ban the Teaching of Critical Race Theory in the Classroom?" May 21, 2021, Counterweight. Pluckrose makes an important distinction between teaching about ideas and indoctrination in ideas and argues that teachers should do the former and not the latter.