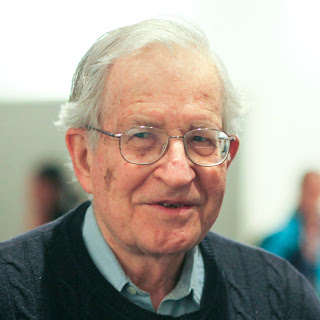 I think that putting theorists and college professors at the head of political movements has been a mistake. The notion that you need a fully formed vision of how the world works before you jump into political action seems nice, except that every such vision turns out to be flawed in some tragic way. Take Leninism/Marxism for example. Nice idea; pretty bad results.

I have a Ph.D and read a lot of history, so it baffles me that anyone could come away from their studies with such certainty. It seems everything I read forces me into a state of cognitive dissonance that requires some sort of recalibration of my world view and my theory of how people might bring about worth-while change in the world.

It seems to me that conservatives, liberals, Marxists, socialists, critical race theorists and especially anarchists all have something valuable to contribute to my understanding of the world. But none of them is adequate on its own.

So this brief discussion by Noam Chomsky, from a thin paperback I have, called On Anarchism, seems to offer an appropriate way to think about the relationship between political activism and understanding. It says why it’s okay to settle for reforms when the revolution doesn’t pan out.

MAN: You often seem reluctant to get very specific in spelling out your vision of an anarchist society and how we could get there. Don’t you think it’s important for activists to do that, though—to try to communicate to people a workable plan for the future, which then can help give them the hope and energy to continue struggling? I’m curious why you don’t do that more often.

CHOMSKY: Well, I suppose I don’t feel that in order to work hard for social change you need to be able to spell out a plan for a future society in any kind of detail. What I feel should drive a person to work for change are certain principles you’d like to see achieved. Now, you may not know in detail—and I don’t think that any of us do know in detail—how those principles can best be realized at this point in complex systems like human societies. But I don’t really see why that should make any difference: what you try to do is advance the principles. Now, that may be what some people call “reformism”—but that’s kind of like a put-down: reforms can be quite revolutionary if they lead in a certain direction. And to push in that direction, I don’t think you have to know precisely how a future society would work: I think what you have to be able to do is spell out the principles you want to see such a society realize—and I think we can imagine many different ways in which a future society could realize them. Well, work to help people start trying them.

So for example, in the case of workers taking control of the workplace, there are a lot of different ways in which you can think of workplaces being controlled—and since nobody knows enough about what all the effects are going to be of large-scale social changes, I think what we should do is try them piecemeal. In fact, I have a rather conservative attitude towards social change: since we’re dealing with complex systems which nobody understands very much, the sensible move I think is to make changes and then see what happens—and if they work, make further changes. That’s true across the board, actually.

So, I don’t feel in a position—and even if I felt I was, I wouldn’t say it—to know what the long-term results are going to look like in any kind of detail: those are things that will have to be discovered, in my view. Instead, the basic principle I would like to see communicated to people is the idea that every form of authority and domination and hierarchy, every authoritarian structure, has to prove that it’s justified—it has no prior justification. For instance, when you stop your five-year-old kid from trying to cross the street, that’s an authoritarian situation: it’s got to be justified. Well, in that case, I think you can give a justification. But the burden of proof for any exercise of authority is always on the person exercising it—invariably. And when you look, most of the time these authority structures have no justification: they have no moral justification, they have no justification in the interests of the person lower in the hierarchy, or in the interests of other people, or the environment, or the future, or the society, or anything else—they’re just there in order to preserve certain structures of power and domination, and the people at the top.

So I think that whenever you find situations of power, these questions should be asked—and the person who claims the legitimacy of the authority always bears the burden of justifying it. And if they can’t justify it, it’s illegitimate and should be dismantled. To tell you the truth, I don’t really understand anarchism as being much more than that. As far as I can see, it’s just the point of view that says that people have the right to be free, and if there are constraints on that freedom then you’ve got to justify them. Sometimes you can—but of course, anarchism or anything else doesn’t give you the answers about when that is. You just have to look at the specific cases.

You can find the passage in Noam Chomsky, On Anarchism (New York: The New Press, 2013), 31-33, or at the Anarchist Library website, at: https://theanarchistlibrary.org/library/noam-chomsky-on-anarchism#toc8
Posted by Bill Jordan at 6:22 AM

Email ThisBlogThis!Share to TwitterShare to FacebookShare to Pinterest
Labels: anarchism, democracy, epistemic humility, History, Human agency in history, I could be wrong, Teaching