The outstretched hand—a symbol for our times

A clenched fist is the political symbol of the moment. You see it more and more—at protests, in social media, on T-shirts.  It reflects the current mood and the political strategy of protesters like the ones outside of Trump’s Tulsa Rally last week.

Nine-year-old Nila Faulk was leaving the Trump campaign rally with her grandparents when chants of "Black lives matter" rang out from the street where protesters were blocking traffic. The chants gave way to shrieks and shouts as a white man stepped out of a truck and pepper-sprayed one of the black demonstrators in the face.
The clenched fist is a symbol of power. Blocking traffic is one way to wield power. Dousing opponents with pepper spray is another.

The fist is also a symbol of solidarity. The fingers are drawn together to show that the people are united in demanding the system respond to their demands. In a rather undemocratic republic like ours, the people’s demands are rarely met without such demonstrations of collective power.

But the fist is also a symbol of violence and coercion. We use real-life fists to threaten and punch. The threat of disorder may be necessary to get a system run by and for the top 20 percent to respond to the demands of the bottom 80 (See James C. Scott reference to this 80/20 idea here).  But that did not seem to be what was going on in Tulsa. Instead of a united people punching up at the ruling class, groups in the bottom 80 were aiming their fists at each other.

There may be good reasons to give up on politics and try to get as much power by, as Malcolm X put it, “any means necessary.” John Brown thought so in 1859 when he organized an armed uprising against slavery in Virginia, sparking the Civil War. People had been trying unsuccessfully for 82 years to rid America of that scourge by peaceful means. Awaiting execution for treason, murder and insurrection, Brown wrote: “the crimes of this guilty land will never be purged away but with blood.”

Brown seems to have been right.  The American electorate had become so polarized (and its system of government was so unresponsive to the free state majority) that it could not address the slavery issue short of war. We seem to be headed that way again.


Given all of this, it’s not surprising that Americans today, like John Brown in the 1850s, are giving up on democracy. Polls have shown that an increasing number of Americans say they don't care whether   they live under a democracy or a dictatorship. According to one scholar who studies these polls, “millennials surveyed today are markedly more favorable to having a ‘strong leader’ than their parents’ generation was at the same life stage.”

People who define themselves as centrists are particularly lukewarm about democracy. Compared to people on the far left or far right, they are less likely to support free and fair elections or liberal institutions and more likely to approve of strong leaders who do not have to “bother with a legislature.”

Another sign that people are giving up on democracy is the degree to which they spurn compromise. Only 44 percent of Americans say they like politicians who compromise.
So we are increasingly raising our fists, not just against the system, but against each other.

I would like to suggest a different approach—one that combines the fist with an outstretched hand.

During the 2016 election, Hillary Clinton called half of Trump’s supporters “deplorable.” It’s a word that means shameful, dishonorable, unworthy, unforgivable. And she added something worse: she said they were irredeemable. To try to reason with such people would be futile, to make common cause with them would be like making a deal with the devil.

Diane Hassen followed 300 undecided voters in the fall of 2016 for the Clinton campaign.  She says that more of them came to a decision (to vote for Trump) because of the deplorable comment than any other single event—not "grab them by the pussy" and not Jamey Comey.  Voters who once were considering a vote for Clinton can now can buy a “Deplorable” T-shirt at Walmart.

Clinton may have been right about some portion of Trump supporters, but why would a candidate for any office, who needs to somehow cobble together a majority coalition, want to write off any significant portion of the electorate? Why not assume they are all reachable, all welcome to vote for you?
Hassen concluded from her study that "instead of speaking about each other, we need to speak with each other."  When she "just listened hard," she found that she had more in common with Trump voters than she "could ever have imagined."
Politics in a democracy is about building coalitions with people you agree with on some issues, but not on others, and whose interests overlap here and diverge there. It requires talking and listening, negotiating and compromising. Everyone who votes against you today is a potential ally in the next election.

A line in the Post story about the conflict outside of the Trump rally suggests that an outstretched hand rather than the fist of a traffic blockade might have been a more effective strategy:

Explaining the traffic-blocking protesters, one of the Trump protesters told his daughter “it’s wrong the way they’re doing things."  "For those he views as protesting peacefully,” reporter Robert Klemko wrote, “he had more empathy.”

What if the BLM protesters had extended an outstretch hand to build on that empathy rather than holding up the clenched fist of a traffic blockade?  A political scientist who studied political activism to find out what works and what doesn't, says he found that effective organizers, using methods like "deep canvassing," understood that empathy for people you disagree with is the key to getting power for a political movement.  "The organizers I have met while researching this book are some of the most empathic people I've ever encountered," he said (Hersh, 128).
But cognitive empathy—understanding—among citizens is the great missing piece in American democracy today. It’s why conspiracy theories thrive, a president can govern through division rather than unification, and why everyone’s favorite political symbol is a fist rather than, say, an outstretched hand.
I say protest by all means, and raise your fist—against the government, the powers that be, the plutocracy, entrenched incumbents, corporate greed, corruption, racism, crime, bureaucratic bloat, neoliberalism, taxes, student debt, unnecessary regulation, trans-phobia, the Fed, sexism, abortion, war, vaccines, global warming, contrails, mass incarceration, or whatever else you think needs fixing.

But to your fellow citizens, offer the outstretched hand and invite them into your coalition. NOTES 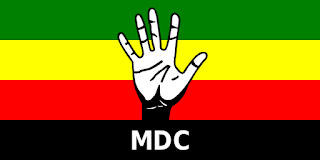 Above, the party flag of the Movement for Democratic Change, the main opposition party in Zimbabwe, features an open, outstretched hand as its symbol.
The liberal, Democratic-voting sociologist Arlie Hochschild spent five years among conservative Republican-voting working class people in Louisiana to understand why they would consistently to vote—in her judgement—against their self interest. Read about her commendable attempt at developing cognitive empathy for fellow citizens in her 2016 book, Strangers in Their Own Land: Anger and Mourning on the American Right.
Eitan Hersh, Politics is for Power: How to Move Beyond Political Hobbyism, Take Action, and Make Real Change (New York: Scribner, 2020).  See chapter 15,  pp. 127-133.
The theme of the December 2019 Atlantic was "How to Stop a Civil War." The issue explores causes of polarization and fracture, as well as potential solutions.  One article describes an intriguing effort by a group, called "Better Angels" after a phrase in Lincoln's first inaugural when he was trying to prevent a civil war, that seeks to mitigate polarization.  Andrew Ferguson, in "Can this Marriage be Saved?" (pp. 86-90) describes how the group organizes gatherings that apply the "techniques of couples counseling to bring reds and blues back together again."
Posted by Bill Jordan at 10:32 AM

Email ThisBlogThis!Share to TwitterShare to FacebookShare to Pinterest
Labels: democracy