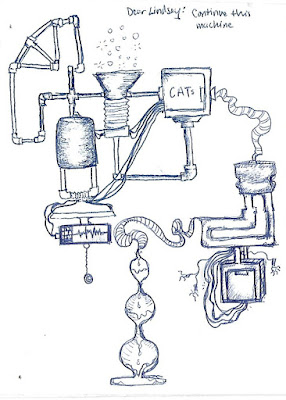 Some enterprising tech genius will invent a new device sometime in the future, and you will find yourself compelled to purchase one. Who knows, maybe it will look something like the cool machine depicted in the accompanying illustration by Emma and Lindsey.

This inventor will be motivated less to satisfy an actual human need or elevate the condition of human kind than by a compulsion to tinker and a desire to make a buck. See Jared Diamond, Guns Germs and Steel, pages 242-243, on how “invention is the mother of necessity.” At first, lovers of new contraptions will buy them. Eventually a critical mass of people will own one and then the rest of us will begin to feel compelled to join the crowd even if we would rather abstain—even after it becomes clear that this new gizmo does more harm than good to human beings. I sadly find myself in the latter category now in the case of the “smart” phone. Some anthropologists have suggested that agriculture was one such invention that did more harm than good, but which we embraced anyway. James C. Scott’s new book makes this argument, as does Diamond. According to Scott, as recently as 400 years ago the holdouts had the advantage over the adopters.

Some years ago they started inventing telephones you could carry around outside the home. This seemed like a terrible idea to me, then and now. Bad enough you could be constantly interrupted by telemarketers at home, now they could follow you around all day. I resisted buying a cell phone as long as I could until not having one had become eccentric at best and irresponsible at worst. I bought the least expensive version I could find and used it as little as possible. I sometimes forgot to check it and this trained most people to avoid calling me. Around this time, spring of 2015, most other people had upgraded from mere cellphones to the mighty smartphone.

Since the introduction of the iPhone in 2007 I have felt, like this blogger, like a character in the film, Invasion of the Body Snatchers, in which one by one, the people around him are replaced by aliens who look familiar but something is missing. “Every day, another friend, family member, or even stranger, succumbs to the inevitable, and becomes a blank-faced moron, staring into a tiny screen all day long,” he writes.

But it is hard to resist joining the pod people, even as evidence mounts that smart phones and digital technology in general are really bad for us (they are actually engineered to be addictive). In Alone Together, Sherry Turkle argues that smart phones and other modes of electronic communication are eroding our ability to communicate in person and generating feelings of alienation. Former Google product manager Tristan Harris contends that smart phones have destroyed a whole generation of American children.  There’s been a dramatic increase in depression and anxiety among our kids. Some blame the smart phones.   But we parents keep buying them for our kids, so as to spare them the fate of being a social non-conformist.

I’m old enough to know that life was better before email, that gigantic to-do list that anyone in the whole world can add to at any moment. Before email, you could come home sometimes and leave work behind. You could even go on vacation from work. Do we control technology, or does technology control us?  Apple has figured out how to annoy me into upgrading my Ipad’s operating system every other time I turn it on, it seems, even though I ever asked for an upgrade. Somehow, Ralph Waldo Emerson did not own an Apple product or know about artificial intelligence when he wrote “Things are in the saddle and ride mankind.”

It’s not just technology. Every high school math teacher I’ve talked to thinks that the vast majority of students should not take calculus until college. I’m told that the college professors agree. Yet some mysterious force called “college admissions” insists that every ambitious student take calculus before they graduate from high school.

That same force seems to be responsible for degrading childhood in a number of other ways in recent years. From competitive day care admissions to professional college counseling and SAT test prep, childhood has turned into one long exercise in competitive resume building. A parent once told me that summer is the time for school kids to do extraordinary things—internships, global travel, solving the world’s problems—so as to build the narrative that will get them into a “good” college or university. Surely all of this is another source of all the anxiety our children are suffering.

I remember a time when sports was a thing you did with your friends after school just for fun. Now, middle class families shuttle their kids to games and practices and summer camps, often in the same sport year-round. Sports, and it seems childhood, has become a job. I don’t know any reasonable person, including the coaches and PE teachers I talk to, who thinks this is a good thing. It would seem, contra Martin Luther King, Jr., that change DOES roll in on the wheels of inevitability. Resistance is futile. We are sheep. As John Stuart Mill put it:

Not only in what concerns others, but in what concerns only themselves, the individual, or the family, do not ask themselves—what do I prefer? or, what would suit my character and disposition? or, what would allow the best and highest in me to have fair play, and enable it to grow and thrive? They ask themselves, what is suitable to my position? what is usually done by persons of my station and pecuniary circumstances? or (worse still) what is usually done by persons of a station and circumstances superior to mine? I do not mean that they choose what is customary, in preference to what suits their own inclination. It does not occur to them to have any inclination, except for what is customary. (On Liberty)


Somehow, in the face of all this, I continue to cling to a vague notion that humans aren't just helpless pawns altogether, or that, as Marx put it, “Men [and women!] make their own history, but they do not make it as they please; they do not make it under self-selected circumstances, but under circumstances existing already, given and transmitted from the past.”

Some years ago I did a directed studies course on utopian thought and utopian living experiments with my friend and student Shannon Hou. In the old days—as recently as the 1960s—a lot of Americans spent a lot of time thinking about how we could perfect or at least dramatically improve our unsatisfactory societies. Novelists, communards, and philosophers put a lot of effort into that project. Utopian thinking seems to be out of style these days, replaced mostly by dystopian imagining—how things will inevitably turn out if current trends continue. Think: Hunger Games, a story about what we are doing to childhood. Dystopianism, however, may be a self-fulfilling prophecy if it breeds a sense of helplessness and nihilism.

As a teacher and a historian I feel an obligation to point to examples of people in the past who were agents of their own salvation, or paved the way for improvements to society—dreamers who imagined and brought about a better world.  King is one example. The long struggle for black equality, along with the labor movement, proves that regular people can take action and succeed spectacularly in making their own history—and our own present.  It's hard to feel a sense of historical agency in the dystopian present.  History needs to be taught in a way that counters the fatalistic narratives that are flooding the public mind and conveys a sense of optimism about what is possible and what good people can achieve when they work together. As James Baldwin put it, “I can’t be a pessimist because I’m alive.” It is up to us who are still living to dream hopeful dreams and fight to make them come true.
Posted by Bill Jordan at 11:53 AM